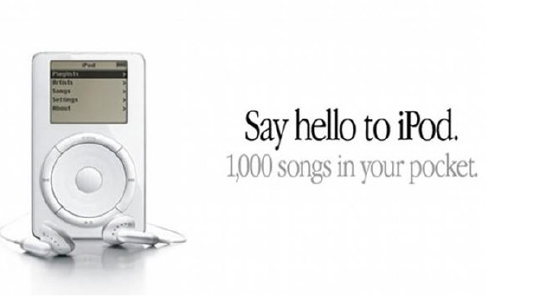 The iPod recently turned 20! A little over twenty years ago Apple launched the iPod and the world of consumer electronics would never be the same.

The original iPod launched after less than a year of development in 2001. There were competitive products at the time. These were early MP3 players that were hard to use and had poor storage capabilities. The iPod was launched – like most Apple products – with an electrifying presentation by rockstar CEO Steve Jobs. It was so successful that it sold over 100 million units during its first five years. In year 6 alone it sold almost 55 million units. The iPod launch was the precursor to the iPhone, iPad and literally billions in revenue and trillions in company valuation.

What can CMOs and agency execs learn from the iPod launch?

The iPod story encapsulates many of the fundamentals of great marketing: the impact of consumer insights, compelling messages and dramatic visuals on great salesmanship.

Insights Are the Key Starting Point

Connie Guglielmo recently recalled her memories of being at the iPod launch event for CNET. She noted how Steve Jobs set the stage for the product. He pointed out how limiting existing music players were. And he talked about the consumer’s love for music.

“Music’s a part of everyone’s life — everyone. Music’s been around forever. It will always be around.”

“And because it’s a part of everyone’s life, it’s a very large target market, all around the world. It knows no boundaries.”

“But interestingly enough, in this whole new digital music revolution, there is no market leader.”

We love music… but we had to go to our music instead of our music going with us.

That grounding in the consumer and competitive environment set the stage for a series of brilliant messages.

We love music… but we had to go to our music instead of our music going with us. How did the Apple team turn that insight into a handful of billion-dollar messages and visuals? 1,000 songs in your pocket.

Just a sampling of the other memorable lines that the Apple team crafted to address core consumer and competitive insights included:

It’s the size of a deck of cards.

It is lighter than the cell phones you have in your pockets right now.

Apple’s legendary ease of use applied to a consumer electronics device.

The scroll wheel lets us not only rapidly find our music but lets us use iPod with one hand.

The right insight can almost write its own copy. It defines its own visuals. It is the essence of great salesmanship.

Consumer insights, compelling messages and dramatic visuals have a multiplier effect on salesmanship. They can be worth billions in revenue and even trillions in company valuation. That is the iPod story and how it applies to CMOs and agency leaders.