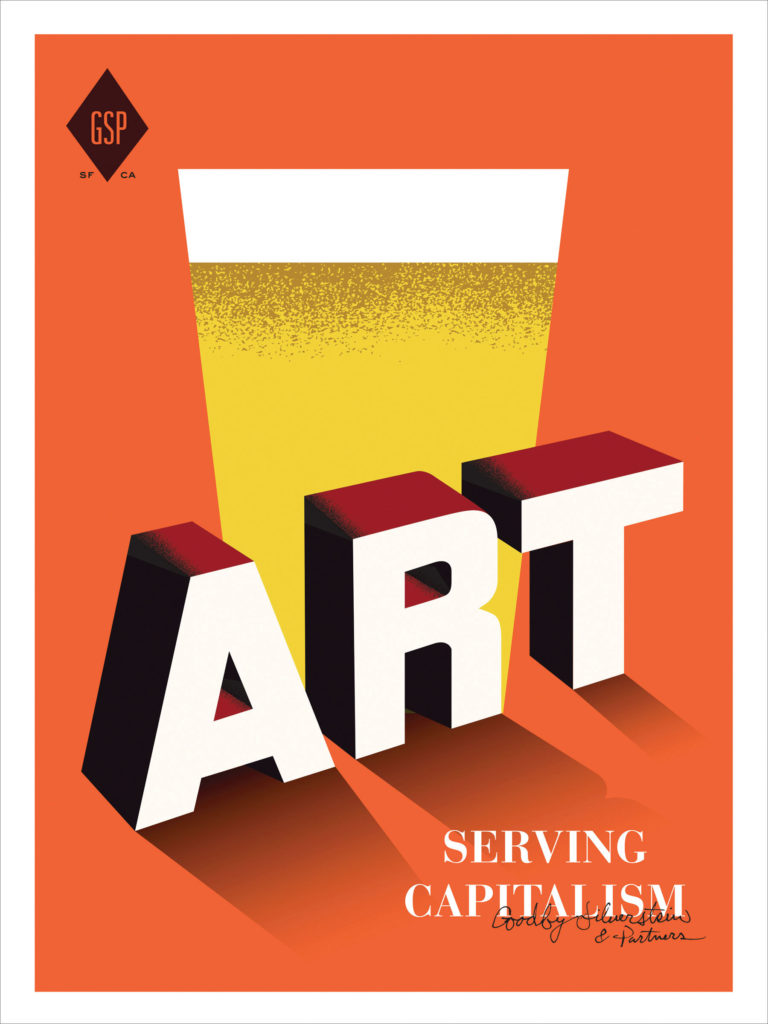 Jeff Goodby needs very little introduction! Jeff wrote for the Harvard Lampoon before working with Hal Riney at Ogilvy & Mather. Jeff and his friend Rich Silverstein started GS&P in 1983. Since then, the two have won just about every advertising award imaginable. And yes, Jeff was the guy who originally wrote “got milk?” Jeff was inducted into the Advertising Hall of Fame in 2006. In 2019 he and Rich received the Cannes Lion of St. Mark Lifetime Achievement Award.

Steve: Why create such a distinctive statement to position GS&P?

Jeff: It’s not a big idea to start an advertising agency. People start them all the time. You have to do something different to really make it worthwhile. It has to be unlike any other one around. The challenge is how are you going to do that? Art Serving Capitalism was one of the ways we chose to stand out.

Jeff: Rich and I came up with the Art Serving Capitalism phrase back in the late 80s or early 90s. It had a tiny bit of tongue in cheek to it. It’s not art serving business – we purposely chose the word capitalism.

Art serving capitalism is a little funny. There’s a tension to it. It says making money in a little bit more edgy way. We’re not afraid of that. I think it was a warning to clients and an invitation to get engaged, to do something big, to do work that might appeal to people more like art does. There’s an intent to it. It’s supposed to get a rise out of people, get them to do something, get them to think, move them emotionally.

Robin: Art serving capitalism is not just the words themselves, those three words, three simple words. It’s also the amazing manifesto you and Rich wrote to bring it to life:

Capitalism, for the most part, distrusts art.

But a look at history shows that business has been at its best when it’s done with the sense of craft and surprise we associate with art.

Art is the stutter step that freezes the opponent. It’s a new way of seeing the world that takes things that are basically the same and makes them suddenly seem different. Art takes things that don’t belong together and welds them at high temperatures. Art teaches business to dance.

At Goodby, Silverstein & Partners, there is no doubt that we are capitalists. We love business. But we believe that it is most successfully accomplished with the help of art. And this faith has made all the difference. For us, and for our clients. We believe that art is the secret weapon of great business. It is what makes the deaf suddenly hear, what makes the blind see. Notice, however, that we are interested in making art that serves capitalism. We like keeping score. We like to win. We like the clarity of it. In the end, art combined with business is bigger art. Business combined with art is bigger business.

Robin: That manifesto is the most epic way we’ve ever seen, and we share it with other agencies to explain that when you really do it right, this is what it looks like. Of course, not every agency can do this because they are not Goodby and Silverstein. But they can write something for themselves that uniquely presents their agency.

Steve: I seem to recall some imagery you created to present Art Serving Capitalism?

Jeff: Rich designed Art Serving Capitalism posters and we put them up around the office. One was for Budweiser. One was for Häagen-Dazs. They resonated with our clients.

The idea was simple: you need to do art, you need to do business. Put them together, you get what we do at GS&P! It doesn’t matter what the medium is.

Robin: What has the impact been over time on the rest of your team?

Robin: Don’t be so modest! Your work – like Got Milk – and all the other amazing work that you guys have done over the decades have generally lived up to the bar of art serving capitalism. The ad that we use most often to illustrate this is the Who Shot Aaron Burr spot from the Got Milk campaign because it is literally art. The script, the set, casting, voiceover, cinematography… it’s art. And it’s serving capitalism. The results that you guys got for the California Milk Processing Board were so amazing that you guys then moved on to do work for other states.

Steve: So, it is the epic example of what is possible when you can articulate your agency’s philosophy in a way that highlights what a prospect or client can expect from the agency. A philosophy that sets the bar and inspires your staff. It seems like it’s written for the CMO of today too. It’s evergreen.

Jeff: It’s also important for creative talent. The ability to talk business with the client is the thing that separates the great creatives from the ones that are just okay. It’s always the biggest thing.

Jeff Goodby, Co-Chairman and Partner at GS&P, grew up in Rhode Island and graduated from Harvard, where he wrote for the Harvard Lampoon. He worked as a newspaper reporter in Boston, and his illustrations have been published in TIME, Mother Jones and Harvard Magazine. He began his advertising career at J. Walter Thompson and was lucky enough to meet the legendary Hal Riney, whom he still thinks of as his mentor, at Ogilvy & Mather. It was with Riney that Goodby learned his reverence for surprise, humor, craft and restraint. In 1983 he founded GS&P with Rich Silverstein. Since then, the two have won just about every advertising award imaginable.

Jeff is also a director, and two of his commercials were selected to be among the top 30 advertising films of the 1990s by The One Club. And in 2006 he was inducted into the Advertising Hall of Fame and in 2019 he and Rich received the Cannes Lion of St. Mark Lifetime Achievement Award. He continues to believe that his success is a happy confluence of his mother, a painter; his father, a Wharton graduate; and his family, a constant reminder of irony and humility.

Robin Boehler is a co-founder of Mercer Island Group. Robin has managed hundreds of agency searches and relationships for businesses of all sizes and types, like Ahold Delhaize, Starbucks, American Century Investments, PEMCO Insurance, PetSmart, Seabourn, Avis Budget Group, Sargento, Ulta Beauty and dozens of other blue-chip firms. She also has consulted to a wide array of agencies including Digitas, Periscope, DaviesMoore, W&K, GS&P, Havas, Cactus, DNA and many others. Robin’s unique ability to work with teams and help improve organizational productivity is the direct result of an eclectic background including her degree in Human Development and Family Studies from Cornell University. Robin is a frequent speaker, having presented and keynoted at events sponsored by the BMA, the 4As, AMI and others.

Steve Boehler, founder and partner at Mercer Island Group, has led consulting teams on behalf of clients as diverse as Nokia, HP, Microsoft, Sprint, Nintendo, Abbott Laboratories and numerous others. He founded MIG after serving as a division president in a Fortune 100 when he was only 32. Earlier in his career, Steve Boehler cut his teeth with a decade in Brand Management at Procter & Gamble, leading brands like Tide, Pringles and Jif.